Voices from Brisbane rugby league: Oral histories from the 1950s to the 1970s (This period was later extended).

The book was launched in Brisbane in 2009 and has had two print-runs. It has sold over 1400 copies. The players interviewed were ‘Mick’ Crocker, Brian Davies, Norm Pope, Peter Gallagher, Fonda Metassa, Barry Muir, Lionel Morgan, Marty Scanlan, Peter Leis and Des Morris.

The referee was Henry Albert and the radio commentator was George Lovejoy.
I have presented papers on this topic in Brisbane, Sydney, Melbourne and Huddersfield at various

My book, Uncharted Waters: Social Responsibility in Australian Unions, was published in 2005. From 2000 to 2011 I was Media Officer for the Queensland Secondary Schools Rugby League.

In 2009 I was one of the speakers at the University of Huddersfield at a ‘Sports and Oral History’ Conference. I spoke on oral history and the Brisbane rugby league.

Also in 2009 my book Voices from Brisbane rugby league: oral histories from the 50s to the 70s was published. This has sold nearly 1500 copies.

I have also a chapter, in Football Fever: Moving the Goalposts, which discussed the history of rugby league in Brisbane. 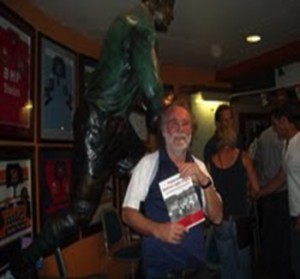