The Importance of Sport in Everyday Life: Frank Burge and 1921 Kangaroos

Lindsay Barrett is a Visiting Research Fellow at the University of Technology, Sydney.

The Tom Brock Fellowship has enabled me, in partnership with the Powerhouse Museum, to produce a web-based archive displaying photographs drawn from an album assembled by Kangaroo forward Frank Burge of the 1921-1922 Kangaroo Tour of England: 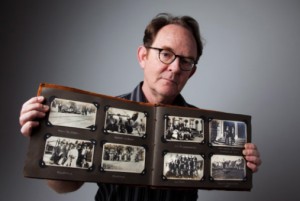